Gameweek 3 is almost upon us, with less than 24 hours to go until the early Saturday kick-off gets underway.

To round off the week, UF Guru Reece Charlton has taken a look through the weekend’s schedule, naming a few card predictions that could land across the next three days.

Reece has also named his very own team selection for this week below as well, so make sure to check it out!

My first card prediction this weekend is that Gabriel Martinelli will hit a double-figure score for the first time this season.

The Arsenal forward has picked up nine points in each of the first two gameweeks this season, after finding the net against Crystal Palace and Leicester. 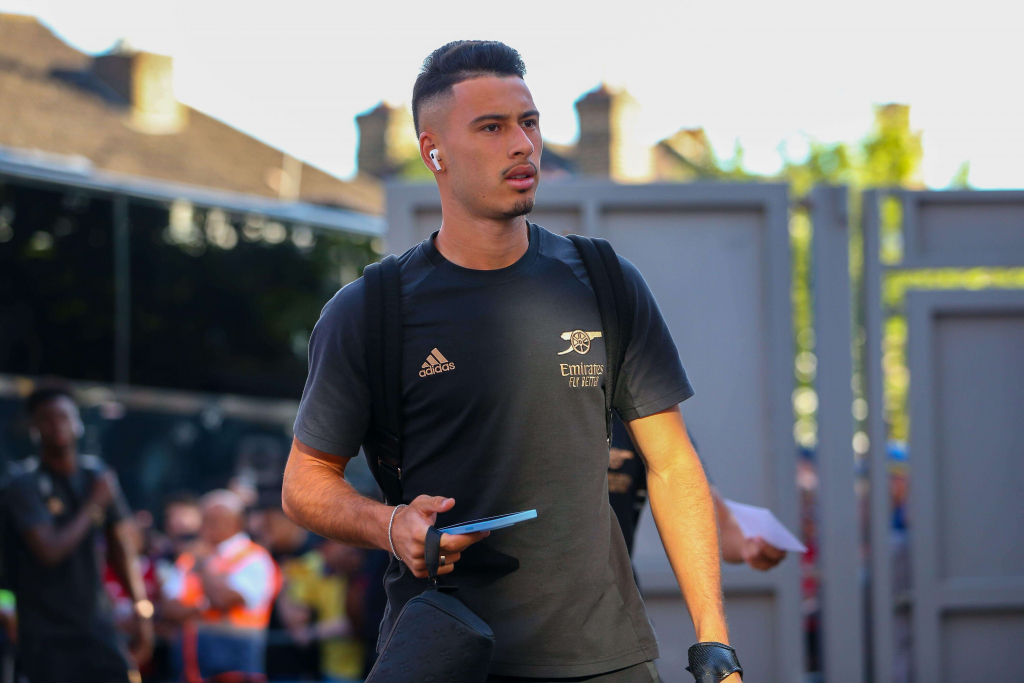 The Gunners take on Bournemouth this weekend, who looked effectively absent when they lost 4-0 to Manchester City in Gameweek 2.

Scott Parker’s side allowed Phil Foden, Kevin De Bruyne and Ilkay Gundogan to all record double-figure scores last Saturday, so it could well be worth taking a chance of Martinelli to be involved with the scoring once again here.

The next card prediction involves Chelsea, as I’m making the call to avoid their backline when they take on Leeds this weekend.

Thomas Tuchel’s side should be claiming success at Elland Road in Gameweek 3, but Leeds have shown some signs of improvement in recent weeks and it’s likely that the Yorkshire side will at least get themselves on the scoresheet this weekend.

That takes away the clean sheet bonus from the likes of Thiago Silva, Cesar Azpilicueta and Kalidou Koulibaly so it may just be worth leaving them out of your side this week.

However, players such as Reece James and Marc Cucurella play their part in the scoring so they might be worth leaving them in your side this week.

The final card prediction for Gameweek 3 is based around Richarlison, who could well be one to note when Spurs take on Wolves this weekend.

The Brazilian forward’s record against the Black Country side is quite respectable, scoring five goals in eight appearances against them.

If Spurs cannot find a way to break through the Wolves backline, Richarlison could be brought on to find that winning goal and pick up a tidy points score.

While it is a risk starting the former Everton forward in your team, he could well play the super sub this weekend and prove to be effective in UF.

Onto my team selection now and I have gone slightly bold with my squad this week, only naming three gold cards out of a possible seven.

In defence, I have gone with two silver cards – firstly siding with Tottenham’s Cristian Romero.

The Spurs centre-back should at least pick up a couple of tackle points this week and holds a chance of landing some clean sheet points against Wolves this week.

My other defensive selection is Brentford’s Aaron Hickey, who has shown promise in his first two games for the Bees.

The Scottish full-back recorded six points against Manchester United this week and he could well be busy once again when taking on Fulham this weekend.

In midfield, I have James Maddison of Leicester, who has proven to be a consistent points scorer for the Foxes since the launch of UF last season.

Maddison has recorded 15 points in the opening two fixtures this season and he holds a fair chance of finding the net this weekend against Southampton.

Brighton’s Alexis Mac Allister takes up the second midfielder slot, after averaging three points a gameweek so far this year.

The Argentinian native has proven to be fruitful in the tackles department and he could be one to watch when he faces a slow-starting West Ham side this week.

Up front, I have taken a chance on Cristiano Ronaldo, whose price has hit the floor in the last few days on the marketplace.

The footballing superstar has a tough job on his hands against Liverpool this week, but he could be one to watch out for if he gets back into his goalscoring ways on Monday night.

Taking up my flex spot is a midfielder card, coming in the form of Leeds’ Jack Harrison.

Harrison has registered 10 points this season and with two assists already to his name, he could well play a part if Leeds find the net against Chelsea this weekend.

The final card in my line-up is the team card and I’ve gone with Everton this week. 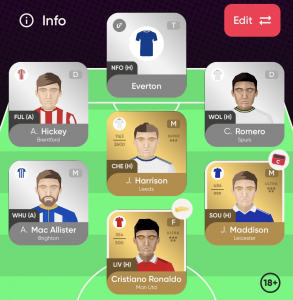 They host Nottingham Forest at Goodison Park on Saturday and I do expect the Toffees to pick up their first points of the season here.

Forest put up a brave performance to land success against West Ham, but they struggled on the road against Newcastle in the opening week and I am willing to take a chance on Frank Lampard’s side bagging the points this week.