With the conclusion of Gameweek 21 on Wednesday, which cards are being both dropped and used the most ahead of the Premier League’s return?

We have the stats… 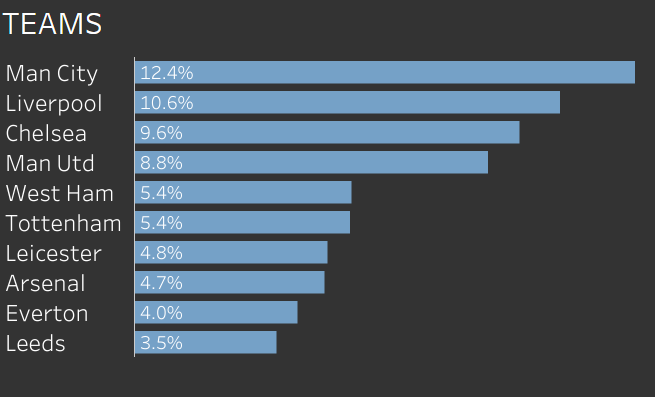 Pep Guardiola’s men are fancied to keep their winning streak going against Chelsea (9.6%) this weekend.

The reigning champions are in 1,351 more UF squads ahead of Gameweek 22 than fellow title pursuer, Liverpool (10.6%).

City have the highest points-per-player total of any other side and are also the most valuable team card with 198 points.

Manchester United (8.8%) remain prominent in sides despite being behind both West Ham United (5.4%) and Arsenal (4.7%) in the points table.

Unsurprisingly, as the highest-scoring defender in the game with 138 points, Trent Alexander-Arnold (4.3%) is in more squads than any other.

Manchester City duo Joao Cancelo (4.2%) and Ruben Dias (3.4%) have been at the heart of a side with more clean sheets than any other.

Reece James (3.2%) has earned 119 points so far this term but is a doubt for the trip to Eastlands on Saturday.

Despite keeping three clean sheets in their last five, Arsenal have no representatives in the top ten.

Belgian Kevin De Bruyne (3.9%) is backed to overcome his former club this weekend, despite only obtaining 103 UF points to date.

Three of Bruno Fernandes‘s (3.6%) five Premier League goals arrived in Gameweek 1 and he has scored just once since September.

Mason Mount (3.1%) remains the most consistent midfielder in the game but may have his workout cutout in Gameweek 22 as he bids to add to his tally of 143.

With Mohamed Salah (6.2%) ineligible, Tottenham man Harry Kane (5.2%) is the most popular attacking option from those bidding to pick up points this weekend.

He is level with team-mate Son Heung-Min (5.2%) ahead of the North London clash with Arsenal on Sunday afternoon.

Sadio Mane (4.7%) is also away at AFCON and cannot add to his total against Brentford, so Raheem Sterling (3.6%) takes third spot.

Liverpool star Diogo Jota (2.6%) is the eighth most popular pick despite sitting fifth in the current forward card standings with 151 points.